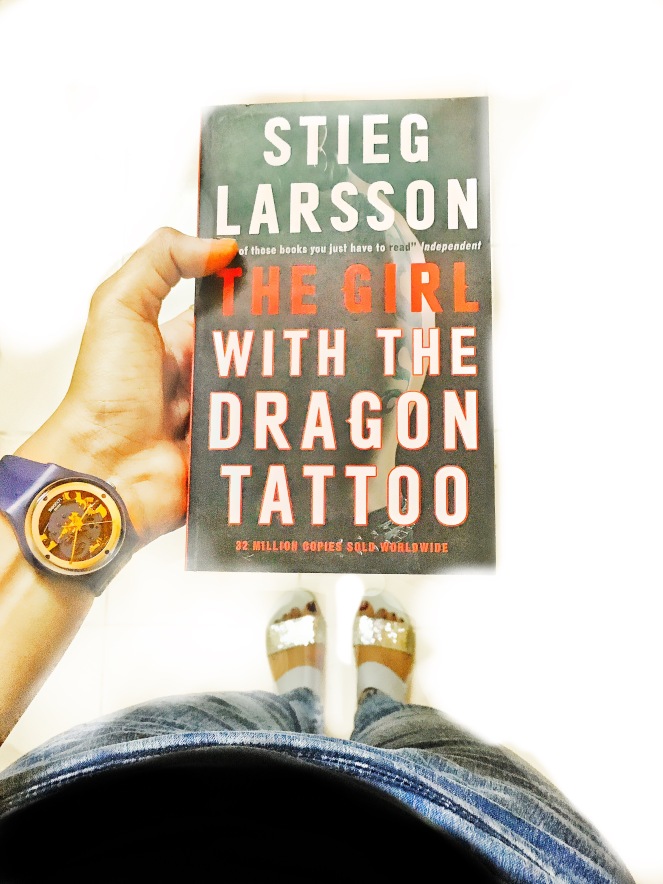 “People always have secrets. It’s just a matter of finding out what they are.”

I picked up this book ” The girl with the dragon tattoo” last weekend at Crossword near my place. I went in looking for “Red Queen” but they didn’t have it so I ended up picking this one. It’s an action thriller, my second most favorite genre after fantasy.

Synopsis: It starts with financial journalist Blomkvist being convicted of libel for publishing fake information about Wennerstrom who is this rich business magnet. He knows that he has been set up but he has no proof of his innocence. In midst of this he gets a strange request from millionaire Vanger to investigate the supposed murder/disappearance mystery of his granddaughter Harriet which happened more than 40 yrs ago. So with help of “dragon tattoo girl” Lisbeth mentioned in the title he tries to get to the bottom of the mystery. What he finds out is for you all to read 😜
What i felt: Its a 500+ pages book. The who-dunit, where did she go parts of the book are well plotted. There are certain parts especially at the end 200 pages where i was like ” no i don’t wanna sleep. I have to finish it” and it did make me go WWWhat did just happen??

The characters are well written and i could imagine them as i read. Blomkvist being this blonde average guy, a man of principle, smart and passionate . I got a dad type feeling from him. . And I don’t why I imagine him wearing a tweed brownish blazer. Whereas Lisbeth Salander is this black haired, tattooed, leather wearing with a resting bitch face. Some what like Angelina Jolie in Tomb Raider. She is has trust issues, emotional baggage which she doesn’t share with anyone. She is also a hacker and A1 investigator with photogenic memory.

Now we come to the but part. Sometimes the book was really dragging. The first 100-150 pages though being the build up for the story are boring. I literally struggled to finish them. It took me around 2-3 days just for those. You can skim through it and still get the gist of it. Theres a lot of financial lingo which went over my head. But once the investigations start it picks up the pace. After the first 200 pages are over the real fun begins.

P.S: Its a trilogy though I don’t think I will be reading the next two books anytime soon.

View all posts by abibliophilelikeme